Volumes 1-8 were available as hardcovers with dust jackets, but were marketed primarily to libraries.  Therefore, when you find them, they tend to be former library books.  The truly scarce copies are those that were never used in a library.  The remaining volumes were only available in paperback, unfortunately.

The hardcovers were identical in text and pictures to the paperbacks, with the exception of volume #6, The Camp Fire Mystery.  The pictures below of that volume were supplied by Jim McNamara, as well as some aditional information.  This volume did have differences between the two.  The hardcover appears as normal, while there was a "Special Campfire Edition" in addition to the "normal" paperback edition.  This is the description Jim gave of the differences:

"Notice [the paperback] is minus the "A Pre Nancy Drew/Hardy Boys Mystery Book" blurb across the top.   It also has a blue band across the art stating "Special Camp Fire Edition".   The back of the paperback book....is does not have the normal ISBN, price it would normally have.  This "special edition" has two extra blurbs inside.  One from the Camp Fire Association and the other is from Laura Lee Hope". 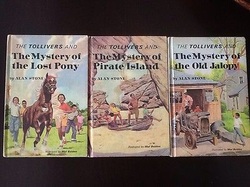 3 of these Wanderer books were re-written from the 3 books in the Stratemeyer Syndicate series called The Tollivers.  I do not own these books (yet)--the picture to the left came from an eBay listing.

This series is also noteworthy because it is about an African-American family--There weren't many of those in the late '60s.

Norwegian editions of the Wanderer books

Although I cover this in the section on Norwegian printings, I have added it here as well.  These titles were printed in Norwegian, tacked on in numerical order to the "original series".  Then the New Bobbsey Twins were also tacked on to the end of the Wanderer books, so in Norway, their numbering goes up to 90-something I think.

UK printings of the Wanderer titles

Currently I only have these pictures, taken from eBay.  Of interest, is the fact that new artwork was used for some titles released in the UK.  Titles 3 and 4 retain the Ruth Sanderson artwork though.  On the boxed set below though, Ruth Sanderson was credited with all the artwork.

The publisher was Carousel, but I do not know how many were printed in this format (I don't own any myself).

All these pictures were taken from eBay auctions. 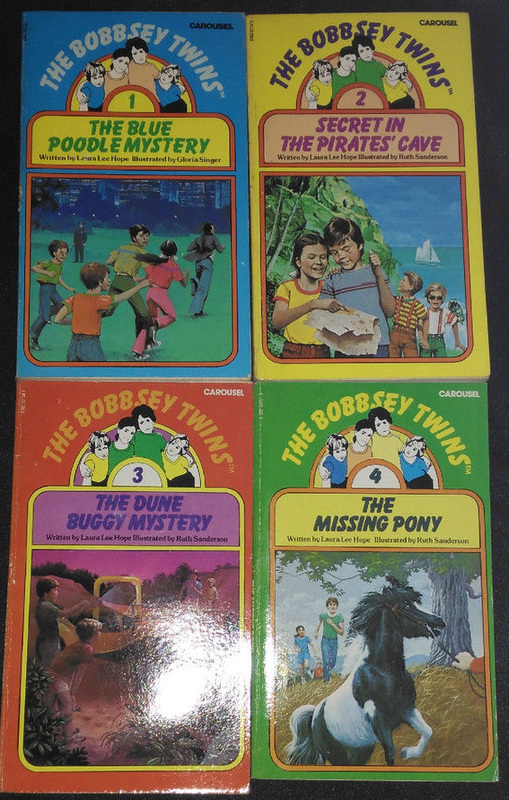