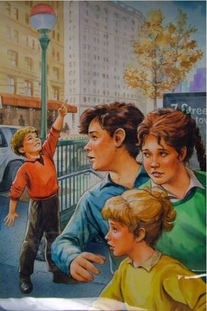 Courtesy of Jim McNamara
I had to once again call on the expertise of someone else to fill me in on these printings, and Jim McNamara filled me in on almost all the information here.  Thanks to him for all this!

These two printings are very similiar, but do have some differences.  Nancy Axlerad, who had been working with the Stratemeyer Syndicate for many years already, abridged 1-8 and 10-13 of the Revised and Abridged editions. Regarding Big City, Jim gave the reason for this not being revised as:
"When they originally updated the first 13 titles they skipped over "Great City".   I had been in touch with Nancy Axelrad         who rewrote the revisions (red covers) and she said they skipped over "Great City" because now a days you wouldn't have     children the age of the Bobbsey Twins running around NYC ..... and the publisher did not want to pay for the expense of         writing a new story.".

Both versions were published under the Grosset & Dunlap imprint.  The Revised & Abridged versions came first, starting in 1989 with volumes 1-4.  In 1990, volumes 5-8 were copyrighted, and volumes 10-13 were copyrighted in 1991.

The Classic Editions all have their 1960's copyright date (these have the 1960s revised texts, not the Nancy Axlerad revisions of 1989-1991), followed by a copyright date for the newer cover art.  Then they also carry a date of being published in 2004  So....3 dates in the front of these editions.

Regarding the cover artists, Pepe Gonzalez (who has since passed away) illustrated 1-8 and 10-13 (the Revised and Abridged editions).   "Great City" is the Classic Edition addition done by "Thompson Brothers", who are two brothers who collaborate.  One does the ink drawings while the other brother does the water color.  Jim recently was able to acquire the original cover painting for Big City, which can be seen on the right.

The artwork for all "shared" titles was the same between the two editions.

Jim provided most of the cover scans below.  I only have scans of 2 of the Abridged books, and the interior scans, and the remainder were filled in from users' scans on www.librarything.com.