Both Sean and Jim McNamara have been kind enough to let me use their scans for these books.

There were 2 boxed sets available, pictured below (anyone know of any others?)

There were (unfortunately) no official library bindings issued by Simon & Schuster for these New Bobbsey Twins.  However you can find copies that were bound for library use by various binderies, in various formats, unofficially.  Some were made by laminating the cover to board, and then gluing in the text block.  Others were made using photocopies of the original cover, applied to board, with the text block glued in.

If you want a huge challenge, try finding these unofficial library bindings *not* used by libraries  =)  They do exist, but very rarely, as they were bound at libraries' requests. 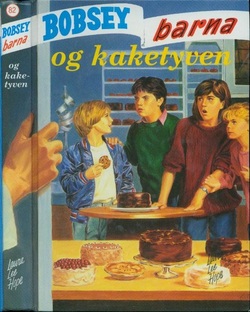 Although I do cover Norwegian printings of the Bobbsey Twins books here, the New Bobbsey Twins are interesting, only in that in Norway, they retained the US cover artwork.  The original series, as well as the Wanderer titles, all had new artwork, only used in Norway.

Another interesting difference with the series is that in Norway, they continued the numbering from the original series, to the Wanderer titles, to the New Bobbsey Twins titles, all in sequence.